I had the opportunity to go to a Weird Al concert in Penticton. What a show! This man is truly an artist, a musical entertainer! It was incredibly impressive the way he sang and danced with his band (who are all original members, which says alot about his character & personality). He’s somewhat older than me (19 years-ish older actually) but man is he flexible, he was high kicking to almost eye level! Impressive show. Another impressive tidbit about the concert was the HUGE demographic of the fans. The audience was filled with men and women of all ages, from 5 years old to 60 years old! Single folks, folks on dates, basement dweller style folks and even those you’d expect to be business savvy folks! Amazing!!

So here’s how the night starts out. My buddy and I hit up the local Triple O for a burger. While we’re ordering we ask the gal running the register, what her favorite burger is, she says, “Oh I’m a vegetarian so I don’t eat any of them. But the jalapeno chipotle BBQ one is a big seller!”. Well, kudos to her for getting a job done, if you need some income, you gotta make sacrifices. And I think it’s great that she didn’t let her personal choices get in the way of serving others. For the record, the burger was quite good!

After our delicious dinner, we went to the concert hall. What was cool is that we were one of the first folks that got to enter the center. We found our seats and sat for a few minutes. We figured it was boring to sit for almost an hour so we wandered the halls looking for a glimpse of Weird Al himself! We saw his personal tour bus and some trailers out back, in fact we met Greg, one of the transport drivers (there were 4 semi trailers full of equipment for the show), a couple security guards (I didn’t catch their names) and then we met Joel, the video lighting guy! He was really cool! A great kid with a sweet gig. He confirmed our suspicions that Weird Al is one stand up guy!

While we wandered around, we didn’t get to see him, but we did get kicked out of a hallway that was just outside the “VIP Experience”. You could hear the weird al music playing and people talking. Speaking of the VIP experience, it was comical to see a couple of the purchasers of the VIP package. They were EXACTLY what you’d expect to be the stereotipycal “over-the-top” fans. Picture one in your head… put that description into the comments below! Please? DO IT, DO IT NOW!

SPOILER: If you don’t want to know what the fans looked like, skip this paragraph. YOU’VE BEEN WARNED! The fans we saw (which may not be a fair representation of all fans) were greasy, long haired and ponytailed down to their belt line, slight BO and incredibly socially awkward! Some even worn foil hats and were fancied up in tie dye shirts and other tacky clothing. For the record, my friend and I are NOT vip holders…definitely not.

So we found our way back to our seats and waited for the show to begin. Weird Al is mighty creative (no surprise there) and the show started with Tacky. He did this really awesome walk through the hallways, through the crowd and up onto the stage. It’s well timed and was really great!. Here’s a couple videos of it from previous concerts:

Throughout the concert he has 12 costume changes! TWELVE!! Pretty amazing actually, in between each of the songs (during the costume change) there would be video clips up on the screen. They had some comical shorts, lots of interviews from ALTV and pretty much any pop culture reference from every cartoon you could think of (The Simpsons, Family Guy, Futurama, robot chicken, you name it!).

One highlight of the evening was when he turned his back to the audience and from a box by the drum set he lifted high… his accordian! The crowd went berserk! I’m not sure I’ve ever heard an audience explode into cheers and screams like that! Weird Al broke into “Another one rides the bus” and it was glorious! The drummer made all the great, expected duck quacks, whistles and horn toots throughout the song. Al’s really good on that accordian. Yup, we’re on a first name basis now.

Another highlight was when he had his gargle solo in “Smells like Nirvana”. You can’t really see it in the picture here but there’s a cup of water by the microphone. Of course, he picked it up, put some in his mouth and gargled like mad (not sure he actually did it there on stage, he might have been…gargle-syncing!). Then he spit it out over the crowd and took the cup and splashed the leftovers over the crowd then threw the cup. Someone is holding that cup thinking, “Weird Al’s lips touched this cup!!!”. Crazy fans. 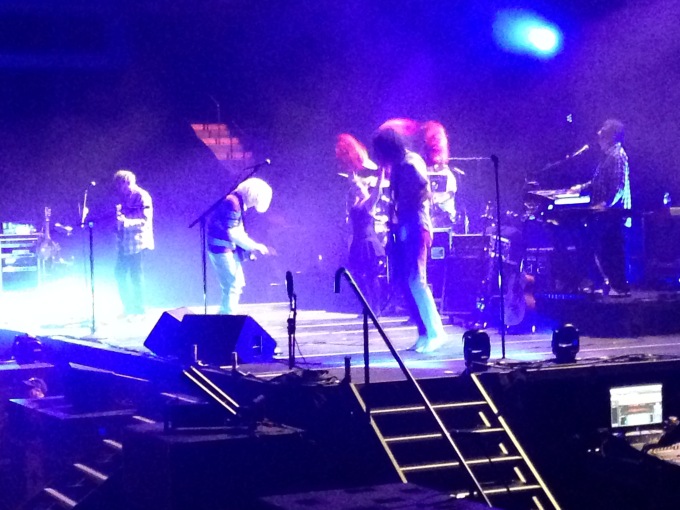 Once everything was done, it wasn’t really done. There was an incredibly long wait after Al left the stage, so long that a bunch of people left. Then…THEN… out came Darth Vader and four storm troopers!

I was glad that they wrapped it up with “the Saga Begins” and “Yoda”. Great songs! Towards the end of the Yoda song, they burst into this epic vocalization portion where they all harmonized, said odd words/phrases and made an all around great rambling of notes that was well worth staying around for! Truly an epic conclusion!

To wrap up the evening, there was a wild fluke of a situation at the end (although not really a fluke because we hung out for an hour and a half). There were 5 of us who hung around out back hoping to see Weird Al getting into his bus and maybe even and get a wave! Well, a security guard walks over and says to the other security guard, “how many of them?”.

“Five”, said the other security guard.

I was first in line! I brought Weird Al’s ‘running with scissors’ album for him to sign JUST IN CASE I bumped into him in the bathroom or whatever (not awkward at all, I’m sure). Anyway, I didn’t know where to get him to sign! I asked the security guard guy where I should get him to sign it. He said he didn’t know and didn’t care. I asked him why he was making this complicated on me! he laughed and said you’re making this complicated! Get out of the line!

Crud. What have I done.

Luckily I was able to go to the back of the line and I was last. he signed my album I asked him if I Could shake his hand and thanked him for some good wholesome entertainment! he looked at me and said, “Oh you’re welcome!”